Jewel Cave National Monument contains Jewel Cave, currently the third longest cave in the world, with 181.89 miles (292.72 kilometers) of mapped passageways. It is located approximately 13 mi (21 km) west of the town of Custer in South Dakota's Black Hills. It became a national monument in 1908.

Frank and Albert Michaud, two local prospectors, discovered the cave in 1900, when they felt cold air blowing out of a small hole in a canyon. It is unknown whether any previous inhabitants of the area were aware of the natural cave opening, which was not large enough for a person to enter.[5] 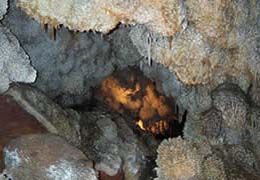 After enlarging the cave entrance with dynamite, the Michauds found a cavern lined with calcite crystals, which led them to name it "Jewel Cave." The brothers tried to capitalize on the discovery, widening the opening, building walkways inside, and opening it to tourists. Although their venture was unsuccessful, news of the discovery eventually reached Washington. President Theodore Roosevelt proclaimed Jewel Cave a National Monument on February 7, 1908. The area around the natural entrance to the cave was further developed by the Civilian Conservation Corps in the 1930s. The National Park Service assumed management of the monument in 1933 and began offering tours in 1939.

As recently as 1959, less than 2 miles (3.2 km) of passageway had been discovered. That year, however, Herb and Jan Conn, local rock climbers, began exploring, and within two years had mapped 15 miles (24 km). Much of the new discoveries lay outside the boundaries of the monument, under land managed by the United States Forest Service. The two agencies performed a land swap in 1965, establishing the present boundaries of the park, and enabling the development of a new part of the cave. The Park Service sunk a 300 feet (91 m) elevator shaft to a previously remote cave area, and built concrete walks and metal stairs and platforms along a one-half-mile loop. The "Scenic Tour" was opened in 1972. Most modern-day visitors tour that part of the cave. In August 2000, an 83,000 acres (340 km2) forest fire burned 90% of the monument and the surrounding area. The visitor center and historic buildings were spared. 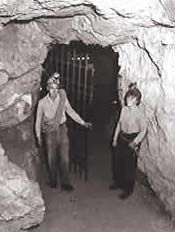 By 1979, Herb and Jan Conn had discovered, named, and mapped more than 64 miles (103 km) of passages. Although they largely retired from caving by the early 1980s, exploration has continued unabated. Because the areas being explored take many hours to reach, explorers now sometimes camp in the cave during expeditions of as long as four days. The cave is mapped by traditional survey techniques, using compass, clinometer and today with lasers instead of tape measures.

Its 181.89 mi (292.72 km) of mapped passageway make Jewel Cave the third longest cave in the world, after Mammoth Cave System in Kentucky and Sistema Sac Actun at the Yucatán Peninsula (Mexico), at 198 mi (319 km).

Jewel Cave was formed by the gradual dissolution of limestone by stagnant, acid-rich water. The water enlarged a network of cracks that had formed during the uplift of the Black Hills approximately 60 million years ago. The layer of calcite crystals that covers much of the cave walls was created by the re-deposition of calcite from water saturated with the mineral.

After the water that formed the cave drained, speleothems (cave formations) began to form. Jewel Cave contains all the common types of calcite formations, such as stalactites, stalagmites, flowstone, and frostwork, although not in the same abundance as other well-known caves. The dry parts of the cave contain some formations created by the deposition of gypsum, such as gypsum needles, beards, flowers, and spiders. Finally, Jewel Cave contains a very rare formation called a hydromagnesite balloon. Those are created when gas of an unknown source inflates a pasty substance formed by the precipitation of the magnesium carbonate hydroxide mineral.

Jewel Cave is open year round. The Park Service offers three tours: the scenic tour, a half-mile loop through a paved and lighted central portion of the cave accessible by elevator; the historic tour, a candlelight tour through the earliest-discovered part of the cave; and a wild caving tour, through an undeveloped part of the cave near the scenic loop. There are 3 surface trails varying in length and difficulty.